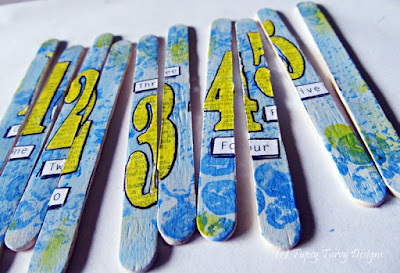 I love discovering different ways to use mixed media techniques to make pretty gift ideas. This one is especially for children...

Puzzles can be a wonderful learning tool to help children remember concepts, use their fine motor skills and help with spatial awareness. Making your own puzzle does not require expensive materials... in fact, most of these materials can be found around the house. This puzzle also requires popsticks, which are inexpensive and are readily available.

I decided to make a puzzle that will help in recognizing numbers 1-5, but this puzzle could easily be extended up to 10 or further simply by adding more popsticks. Rather than numbers, a child's name could be used in order to help the child to recognise and spell their own name. 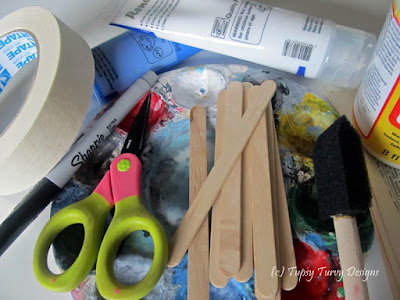 * Popsticks - I used 10 popsticks in my puzzle, but any number could be used.
* Masking Tape - to hold the sticks together in the process of creation.
* Paints - White and other colours that you want to use. I used acrylic paint and chose a blue and yellow colour theme.
*Scissors
*Decoupage Glue (or you could possibly use PVA glue, thinned with water)
*Brush for the glue (a cotton bud could possibly work)
*Something to mix paint on (a plastic lid or plate would suffice)
* A permanent pen
*Paper - only need to be scrap paper. I used old book pages.
*Pencil
* Kitchen sponge and bubble wrap (optional)
* Computer/printer or lettering stencil
*Craft knife and cutting mat 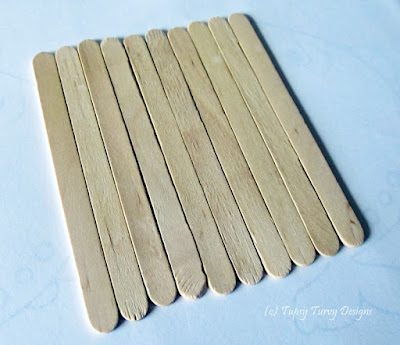 Step 1 - Line up the popsticks. 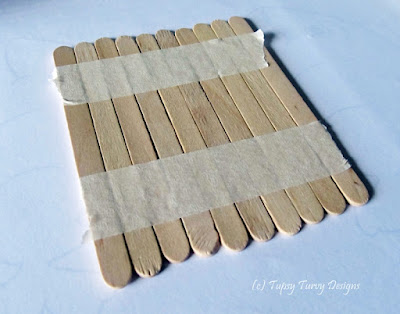 Step 2 - Place two lengths of masking tape over all the popsticks, one piece at the top and one piece on the bottom. This will stop the popsticks from moving when making the puzzle. 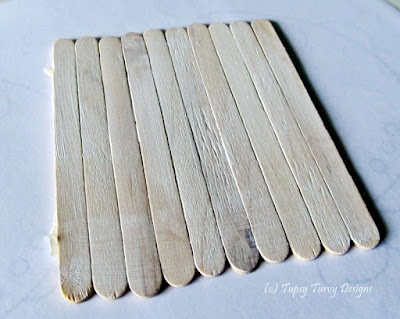 Step 3 - Turn the puzzle over (so that the tape is facing down) and paint the side facing up with white paint. 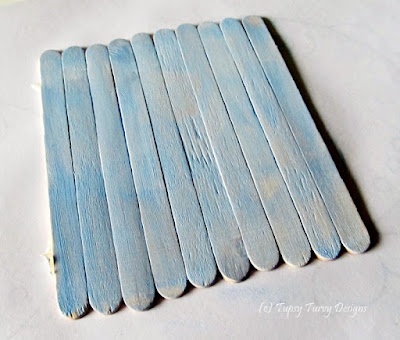 Step 4 - Once the white paint is dry, mix up a light hue of the main colour with some white and paint over the top. I chose blue. 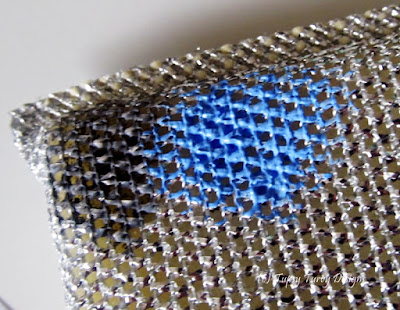 Step 5 - Add a little more main colour to the light hue (to make it darker) and place a small amount on a kitchen sponge. 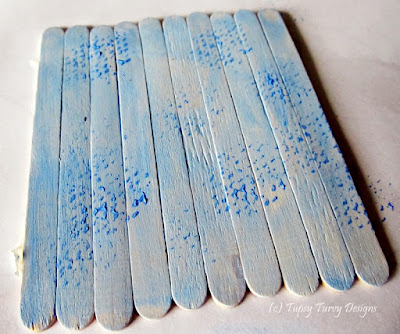 Step 6 - Sponge over the top of the popsticks, making sure some of the lightest hue is still showing. If you don't have a spare kitchen sponge, use a brush, cotton wool ball or even your fingers. 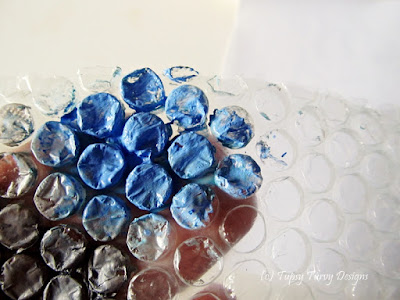 Step 7 - Add more main colour to the mixed paint (to make it a little darker still) and place a small amount on the bumpy part of bubble wrap. 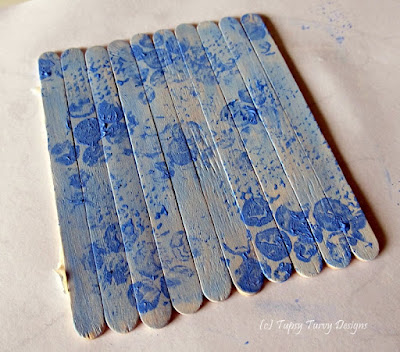 Step 8 - Print it over the popsticks, ensuring that the lightest hue and some of the kitchen sponging is still showing. 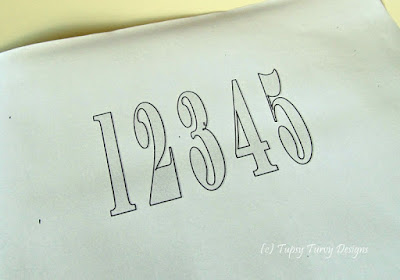 Step 9 - Using a computer or lettering stencil, create the main image that is desired on the puzzle. In my case, I needed large numbers from 1-5 and small number words. 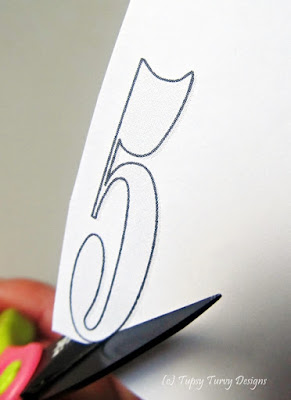 Step 10 - Cut out the numbers (or letters) with the scissors. 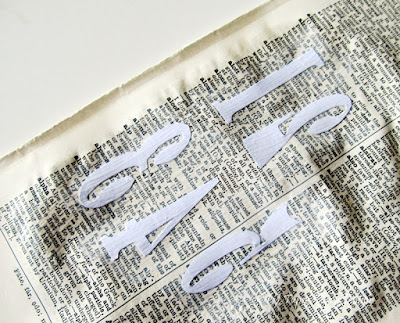 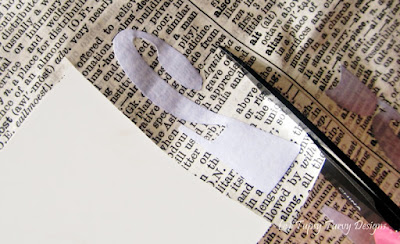 Step 12 - Once dry, carefully cut around the numbers or letters with the scissors...

... so when they are turned over, they look like this. 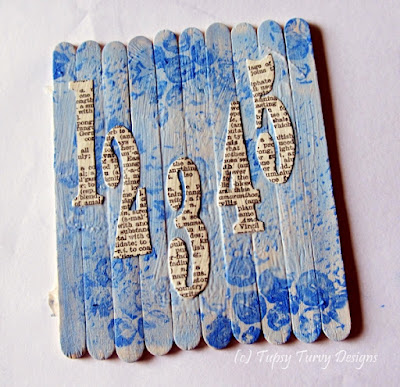 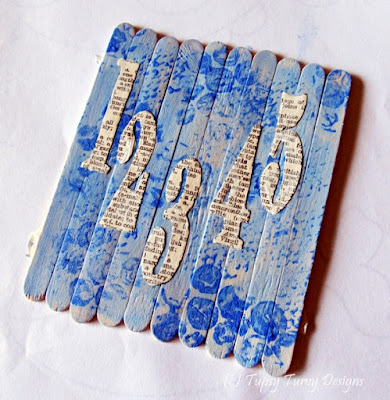 Step 14 - Once dry, paint over the letters or numbers with a layer of white paint, being careful to keep the white paint on the numbers/letters and not on the popstick background. 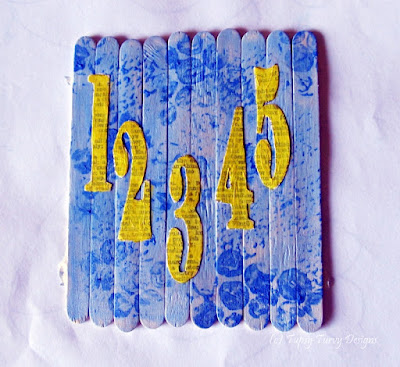 Step 15 - Once dry, paint over the numbers or letters with your chosen colour. I decided to add a little brightness, so I painted my numbers in yellow. 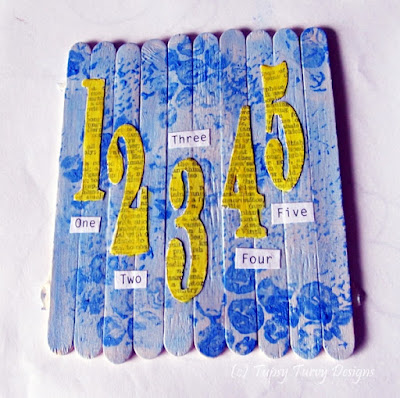 Step 16 - This is rather an optional step, however, I wanted to add the number 'words' to the puzzle. I typed up the words that I wanted on a computer and printed them out. I cut out the words with scissors and glued them down on the popsticks with the decoupage glue. I also placed a thin layer of decoupage glue on top of the words. You could do the same with any chosen words according to your puzzle theme. 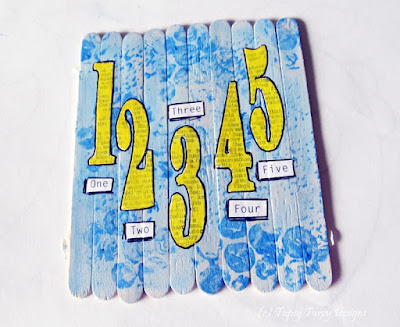 Step 17 - Once dry, outline the numbers or letters and words with the permanent marker. 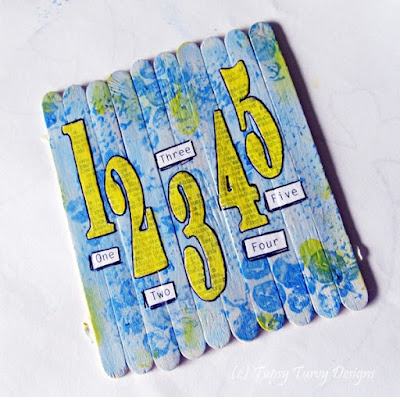 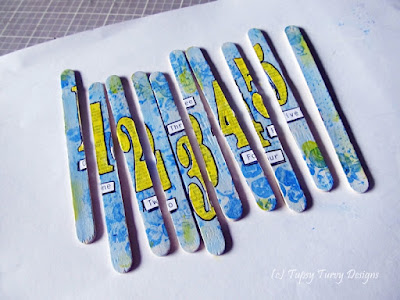 Step 18 - Turn over the puzzle so that the plain wooden background is facing up. Take off  the masking tape and carefully move the craft knife between the popsticks to cut them apart. Turn each popstick over so that the painted side is facing up. For durability, paint a thin layer of decoupage glue over each individual popstick. 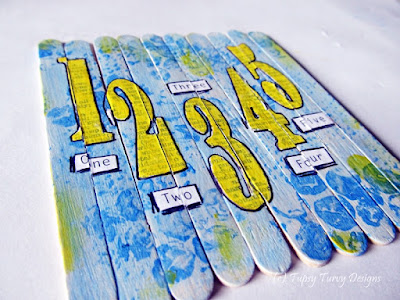 Once dry, the puzzle is all set to be put back together again.

These popstick puzzles would be an ideal gift as a stocking stuffer or to place in a handbag for a toy that could be pulled out to entertain a child when out and about.

I would love to see your popstick puzzle design and final product. Feel free to let me know!

A white flower on a stormy, grey background {mixed media}

I love storms - the ferociousness and power of them, but I dislike being in the midst of them. In fact, to be brutally honest, I am quite a 'scaredy cat' when thunder rolls and claps nearby. I think it all stems from learning about weather in my teens. I had (and still do) a fascination with storms, tornadoes and clouds and read all about them from books from the library. From then on, I developed a healthy respect of the power or storms and the knowledge of what exactly lightning is and what strong winds can do.

It didn't help things when we had a powerful storm rip through my home area one Summer. I have never heard wind so loud before and the violence of the wind ended up bending TV antennas and uprooting some trees. This was coupled with pelting rain. 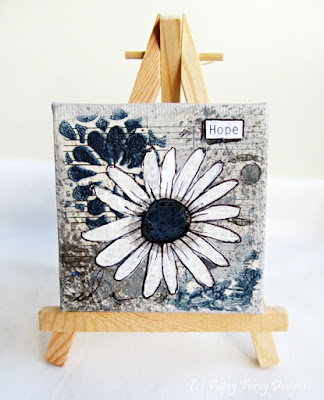 I would not have thought about this colour combination if it weren't for a custom order that I filled a little while ago. I fell in love with the stormy grey hues with the touch of navy blue. I knew that I wanted to create a set of flowers on tiny canvasses and the colour that I chose for the flower... white. 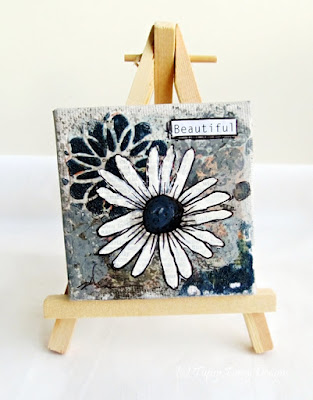 The next decision was working out words to place on these canvasses. The first word that I thought of was 'hope'. No matter what 'storms' are thrown at us, hope shines through, similar to the stark, white flower brightly blooming on the stormy, grey background.

I also thought about the word 'beautiful' - the purity and simplicity of the colour white being simply 'beautiful'. Words of encouragement and strength.

Sign up to receive 10% off of your first purchase, regular updates, access to FREE resources and special member opportunities...

Crafty blogs that inspire me: