It's not much longer now... 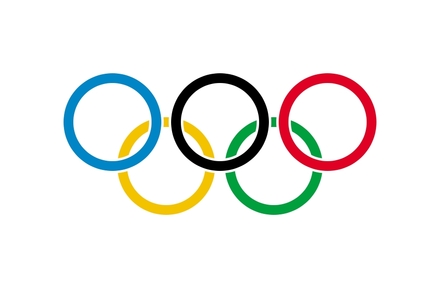 Very soon we will be witnessing the Opening Ceremony of the 2012 Olympics in London. Athletes are arriving in London and preparing themselves for their moment in history. Records will be broken, elation will be heard and tears of disappointment will be shed.

This week, the little ones and myself have been reflecting on what exactly are the Olympics. It is wonderful to see the enthusiasm and excitement of the children as they were only toddlers when the last Olympics were held in Beijing, China. For most of them, the Olympics are totally new and the questions that they have are fantastic.

We looked at the Olympic flag - the five, different coloured rings and what they represent (five rings for five continents in the world and every country that participates in the Olympics has at least one of the colours of the rings in their flag). We made our own flags by using paper towel cardboard rolls, dipped in paint, printed down on white paper.

We made our version of the 2012 Olympic torch by printing bubble wrap, dipped in black paint onto yellow paper. When dry, we taped the printed paper into a slender, conical, torch shape and placed scrunched yellow, orange and red tissue paper in the top to represent the 'flame'. Our torches will be used in our own 'Torch relay' when we have our own 'Olympics Day'.

I showed DVD clips of past Olympic events. As an Australian, a poignant moment at the Sydney 2000 Olympics was Cathy Freeman's gold medal win in the 400m running race. Another moment was the gold medal win for Australia in the Men's 4x100m Freestyle swim. I didn't tell the children who was going to win and the children madly cheered for the Australian team. I also showed footage of Nadia's perfect 10 score in gymnastics in the 1976 Olympics. As a result the children had so many questions that were fuelled by what they saw...
The children's enthusiasm, in turn, fuels my enthusiasm. I can't wait to show you more...
Posted by Tupsy Turvy at 7/20/2012 09:08:00 pm

Thanks for viewing my blog! Please leave a comment...I would love to hear from you. I read and respond to comments made. Thanks again!

Sign up to receive 10% off of your first purchase, regular updates, access to FREE resources and special member opportunities...

Crafty blogs that inspire me: